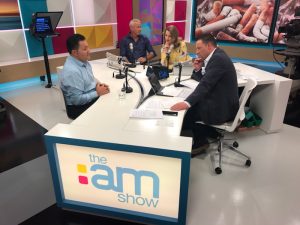 “The Government generates $1.9 billion from tobacco taxes each year – 3 percent of that is directed into smoking cessation programmes,” he told The AM Show.

“We advocate that should be much, much more. The increases which are happening on January 1 every year have not been directed to smoking cessation and tobacco control.”

He suggested the stigma that’s been attached to smoking could be backfiring, with people too embarrassed to admit they have a problem.

“There are a lot of people out there that can’t even inform their employers they smoke, for fear that they may be disadvantaged in their employment. So there are some major stigma issues that we have to work through.”

Treatment options for smokers – current and former – is also lagging behind other, less-stigmatised addictions, he says.

Anti-cancer drug Keytruda for example has been approved for people suffering melanoma, but not lung cancer.

Pemetrexed has only recently been funded in New Zealand, about 13 years behind Australia. “That gives you an idea about where New Zealand tracks with treatments for lung cancer,” said Mr Hope.

Lung cancer kills more Kiwis than any other type of cancer. Its symptoms include wheezing, chest pain, lower back pain, shortness of breath, weight loss, coughing up blood and persistent cough – but the Ministry of Health says it’s particularly deadly because it’s usually detected too late to stop.
“Anyone can get lung cancer, but there is a direct relationship between smoking and lung cancer,” said Mr Hope.